Saturday of Week 2 involved breeding frogs together (I didn’t know that was a thing until it popped up in the Curator challenge, honestly), spraying the monster under the bed, and then going to work. She was horribly exhausted and passed out as soon as she got home, but she got a promotion and officially joined the Arts Critic branch as a Snooty Pundit. Her coworker called to congratulate her and invite her out, but she was about to not be able to stand, so she had to say no. Salim also asked her out a little later and she was still too tired. I don’t know how I’m ever gonna get her married and making babies…

When Sunday arrived, we officially entered Week 3. For anyone curious, she’s 6 game days from aging up to Adult… Uh oh.

Once she was awake, she showered and then called to ask Salim on a date. He said no… Asshole.

Mac n cheese was breakfast. Piper’s my kind of Sim. She worked from home on Sunday so she had to go watch 2 performers in the Arts Quarter. She invited Salim along cause I’m determined. The old guy hogged the Busking spot… Where’s a living statue when you need one? While I waited for a new performance, I sent Piper and Salim over to continue someone’s mural together. While they worked, a third person showed up. Teamwork!

Finally someone showed up! While they watched, Piper tried flirting again and, once again, it failed spectacularly. I’m starting to get tired of Salim’s bullshit, y’all…

I sent her home and she got a bit of sleep and a shower, then someone I don’t remember her meeting invited her to the nightclub for a Dance Party. I decided to focus on getting her some more male socialization since things are going absolutely nowhere with Salim. She managed to embarrass herself, but made a smooth recovery.

And then passed out on a bench. 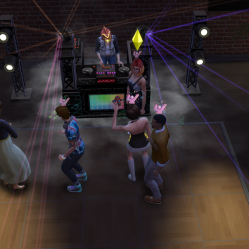 She decided to flirt with Joaquin Le Chien, the DJ guy in Spin Masters with the wild shirt, and it went well for a moment before it very suddenly wasn’t. God I miss the Make Happy cheat for Needs…

So with little progress made, asshole Salim texted her to go to the Humor and Hijinks Festival. She’s about to pass out from exhaustion, but what the hell? I sent her. They joined the Jokesters together.

As I write this, I’ve realized it’s now Monday evening in game. So I guess she partied all night. No wonder she’s tired. 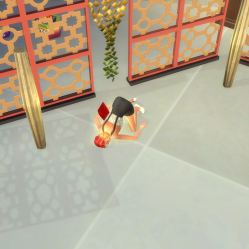 She recovered long enough to try the bubbles and joke with him before passing out again. And then again after the fireworks… I’m so good at this game… Finally she went and took a nap behind the gallery before I sent her home since it was almost 5am on Tuesday.

I was getting 24 hours left threats over bills I didn’t notice were delivered. Before I could pay them, Salim was asking her over to his place! :O

She immediately hopped in his shower and I let her take her last PTO day. He yelled at her twice for trying to make food for both of them, but didn’t mind her getting a bowl of cereal. I tried to make them flirt, but as you can see, that didn’t last long.

After his cat nap, she actually had very good success flirting, before they both needed a nap. Progress! Maybe there’s hope yet.

He cooked for her when they woke up, which is good because she was getting pretty hungry again. I swapped the channel to Romance to try and get some emotions going a certain way, but then she went to sleep in his bed and he kicked her out… Oops? So I just sent her home. 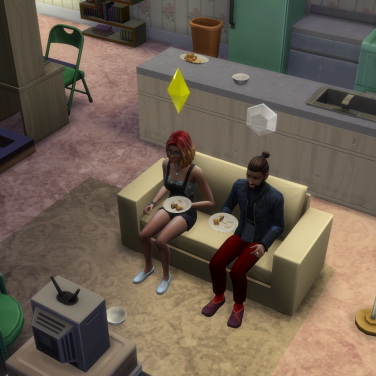 Wednesday she got an invite to a birthday party and I couldn’t accept because she couldn’t skip work, which was frustrating. I’m really glad I didn’t choose one of the friend-oriented Aspirations… Or romance, for that matter.

But then she came home? Completely out of the blue, too. No notification or even partial pay, but she did have an Embarrassed at Work Moodlet. Idfk… But I guess I’ll focus on other things, then. Like breeding frogs.

With her needs high for once, I had her ask Salim on a date that evening. She took him to the Blue Velvet, a nightclub. It actually triggered a prestige event! Yay! Only a bronze medal, but still. I thought my game was glitched because I wasn’t getting those anymore.

So guess who showed up after the date? It’s now early Thursday morning. It was Joaquin! She flirted with him and… it went well. 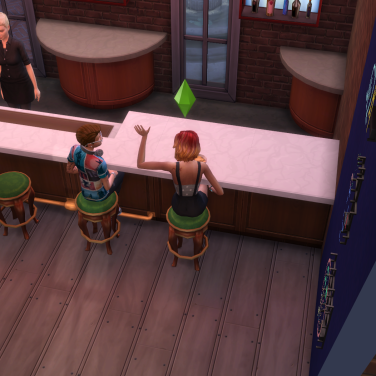 On that note, I leave you…